skip to main | skip to sidebar

Reader Dear, I'm wandering back through history.  (Do not fear, it's a relatively short distance in reverse).  It happens, there were a couple of shows that the Yard Man and I went to see in the past few  months; I failed to say bloggety-blog about them! Without photos, I'd still be on mute even now. But I've got the pics!   In spite of the Yard Man's hisses to "Put that thing away!" I managed to (ever so discreetly) focus my camera on the stage.
Here is a tiny scintilla of Million Dollar Quartet:
Elvis Presley … Johnny Cash … Jerry Lee Lewis … Carl Perkins.  The play was based on a true story.  These four musicians were "brought together by an extraordinary twist of fate on a December evening in 1956"  The show was a four-star, five-star event!  If you can figure out what I'm saying there, Dear Reader, I'll give you my blue suede shoes! 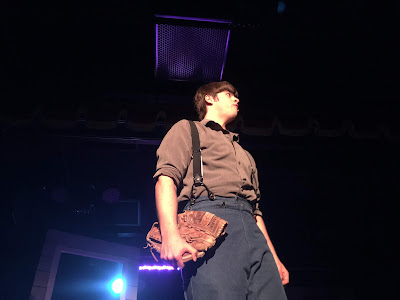 Next, I've got a clip or two from a show to which the Yard Man had gotten free tickets.  The venue was a local spot that caters to tourists (who eat supper at the joint first, then eat up the show that follows, featuring actors portraying Amish) This show told the story of an Amish boy who dreamed of becoming a ball player (No spoiler alerts).  Here, Reader Dear, is one thing I'm going to divulge: Since we arrived quite early, the Yard Man and I were privileged to sit in front row seats.  (The seats were individual chairs arranged in rows).  I was so close to the stage that I could have reached right out and pulled on a pant leg or two with ease!
My confession: while it's true that the play kept me interested, it did not prevent my imagination from frolicking around a bit.  Suppose I were to, um, sort of, um,  tie shoelaces together while actors were standing right there in front of me? (And, um, that sort of thing, Viewer Dear)

These final short bursts of video are not from a formal or actual performance that we attended.  They were just part of a pleasant morning the Yard Man and I spent in the city, pretending to be tourists  (We weren't looking for information or  Amish depictions when we visited the  downtown information center.  It was there we stumbled upon this little bit of "historic" action).
Lastly,  we enjoyed drinks and a musical jam session atop a tall building in the city. 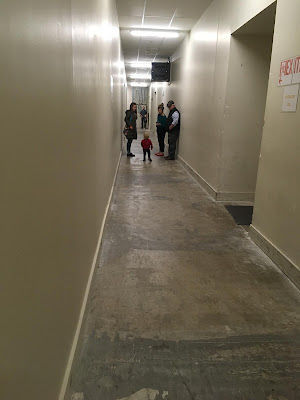 Not a show, Reader Dear, except for the fact that this  recording features a few of my small actors, and you may be inclined to watch, hoping for some kind of story line or plot.*


*Well, okay.  After a family meal out, the Yard Man and I, with most of our descendants,  found ourselves wandering through a labyrinth of hallways somewhere in the bowels of the local mall.  But what was this?!  Were all the exit doors locked?! Some of the oldest and youngest among us became alarmed.**

of our celebratory weekend in Bethlehem, Pennsylvania, the Yard Man and I decided that we would  attend services at the Moravian church. 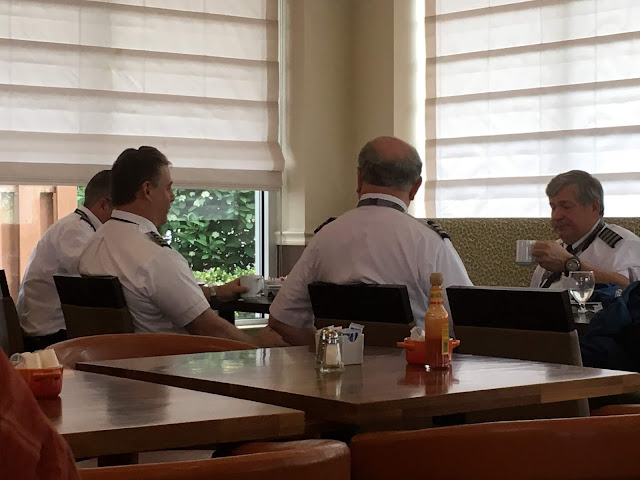 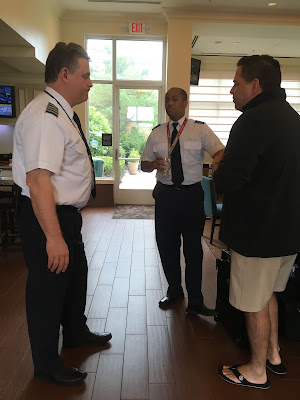 First, we stopped by the hotel lobby for breakfast.   That, Reader Dear, is when I had to do a double-take.  Could that really be four men dressed in matching outfits over there at the corner table?!   Turns out that it was, indeed.  It follows, naturally, Dear Reader, that I needed to ask these four men if there was any chance they would be singing a song for me?  (Yes, yes, of course I explained the performance I'd gotten the previous morning).

"Sorry," one of these men responded, "you wouldn't want to hear us sing!" They all laughed.
"But," he added helpfully, "we could fly you anywhere you want to go!"

I pondered this.  It may not be undying love, I thought, but it still sounds like a pretty good deal!
I wasn't quite prepared to hop on a plane at the moment, however, (and, you know, there was the Yard Man to consider; I wasn't going anywhere without him!)  We ate breakfast and kept to our original plans.  We headed for the beautiful Moravian church.

What a stroke of luck, Listener Dear!  As if these fine folk are not already very musically inclined, on this particular day we were fortunate to get in on their "Music Sunday" service.

All the music was lovely.

And the choir was simply heavenly!


Following the service, the Moravians served their traditional Sugar Cakes*
(pretty heavenly, too!).
...............
*(Straight from Wikipedia, Dear Reader) "The Moravian immigrants who founded Salem, North Carolina, in 1766 brought this recipe with them from Central Europe, their ancestral home.  Originally, sugar cake was prepared once a year for the Moravian Church Lovefeast on Easter morning, but its popularity soon led to its appearance at other holidays and festive occasions."
...............

After an outdoor (sidewalk tables) lunch at a restaurant with some very tasty food, the Syrian owner and some of the waitstaff posed for a picture and offered congratulations to us (you know, for the forty-five years together).  We offered the owner congrats on the very fine food and the fact that he's served two U.S. presidents.  (If you squint and look closely at the photos on the wall in this photo, Viewer Dear, you may spot these two**) 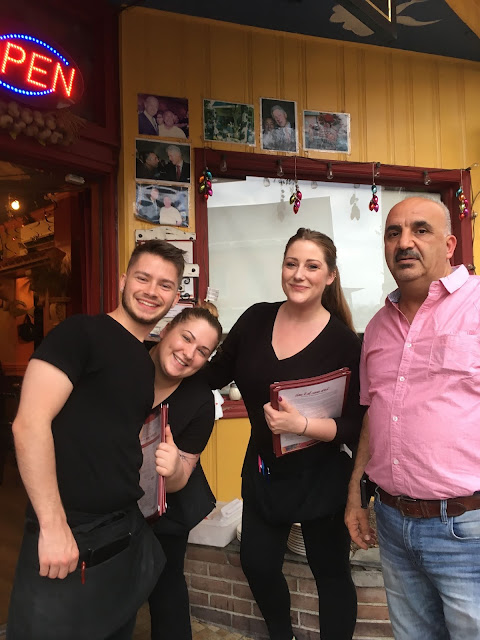 **What better enticement to eat here than seeing these photos?!  These two ex-presidents are the only two in U.S. history for whom I campaigned door-to-door! 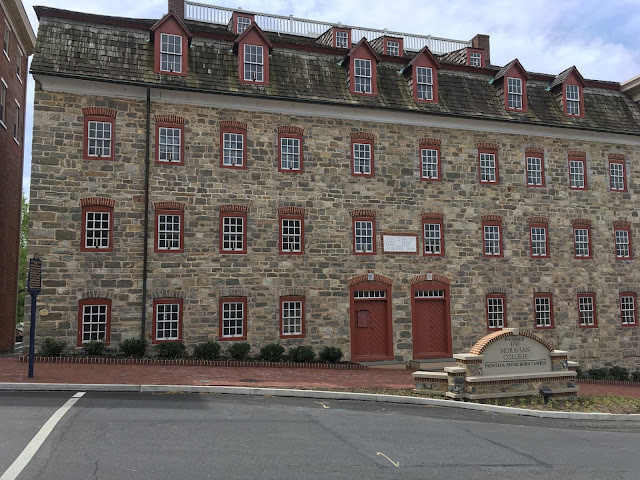 the Moravians.   It was discovered (by the Yard Man and myself, as we continued our celebratory weekend) that the Moravians (a religious group) came to this country from Germany and 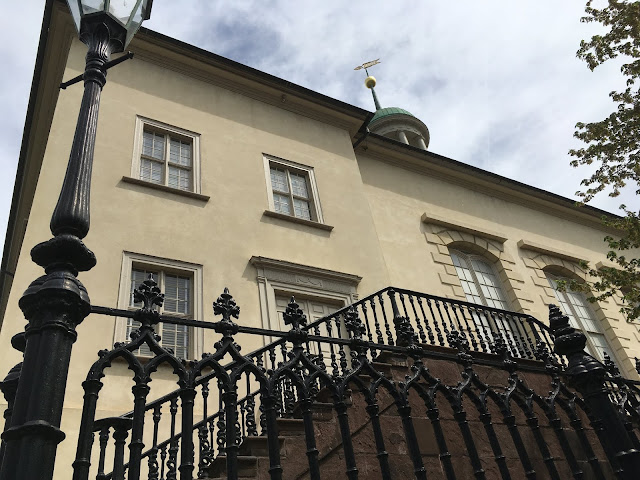 settled here in Bethlehem, PA, in the seventeen-hundreds.  The town is filled with their beautiful early architecture.  There's a Moravian college, a Moravian bookstore,  a museum filled with Moravian artifacts,  and a fact-filled guide named Gary, who is not a Moravian. 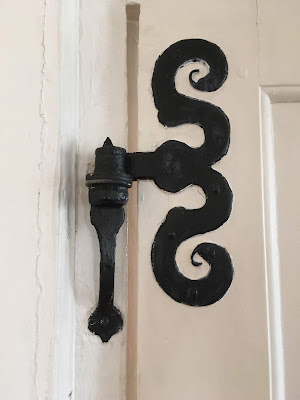 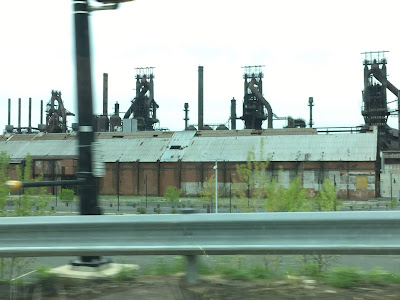 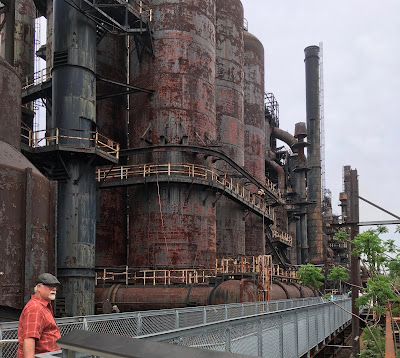 Of course, there is a fact about Bethlehem, Pennsylvania, that is better known than the story of the Moravians.  It is the story of Bethlehem Steel. The sadly-defunct steel working structures punctuate the skyline, and there is a museum detailing the history of this bridge-and-ship-and-all-things-steel-making company.  (It is a long history [I tried to maintain my steely determination to stay and hear all of it.]) 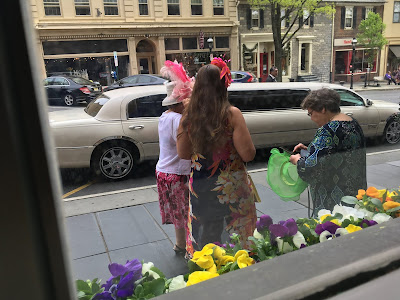 More interesting was the afternoon hoopla on the lawn below the elevated walkway (that runs along the side of the abandoned steel plant).  Before the Yard Man and I walked over here from our delightful lunch at the historic Bethlehem hotel, we had spotted many hat-wearing women.  It was slightly mystifying.  But when we got here, aha; Reader Dear, we got the clues we needed.  The Kentucky Derby was coming to Bethlehem, Pennyslvania, via an outdoor large-screen TV!  The crowd was gearing up!


(Meanwhile, some less-celebrated horses gave a live performance to at least a few interested persons who happened to be watching [Reader Dear, one of these persons asked the other, "Is that a Percheron?"  and the other responded: "It's a mix"]) 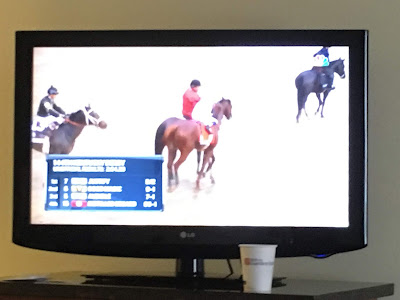 The Yard Man and I watched the festivities for a while, but eventually we decided we'd enjoy the "most exciting two minutes in sports" from the comfort of our hotel room.  I coaxed the Yard Man into stopping by the off-track betting building (conveniently located near the hotel).  Now,  it's true that my dear old dad was of the strong opinion that this kind of betting is "a tax on stupidity" and I tend to agree.  It's not a wise use of money.  But, Reader Dear, as soon as I saw that horse with the number seven was favored to win, I paid my small  tax.  "Seven has always been my lucky number, you know!" I said to the Yard Man with fervor.  "I know this horse is going to win!"

We took a little celebratory trip over the weekend,

the Yard Man and I (several weeks ago).  It had been four and a half decades since the day we both said, "I do" to the man who asked us if we did (He happened to be my uncle, but he had power vested in him by the state of Virginia [and he had God and witnesses to assist him in his assignation of the roles of "husband" and "wife"]).

Because of various circumstances, we couldn't spend our celebratory weekend too far from home, so we went to Bethlehem, Pennsylvania.   En route, we came upon Roadside America.  This, Reader Dear, is a tourist spot straight out of the 1950s!   If you have ever been to this attraction, please know that nothing has changed here since you last visited!  It looks the way it did when you were a child  (I'd be happy to wager a bet): 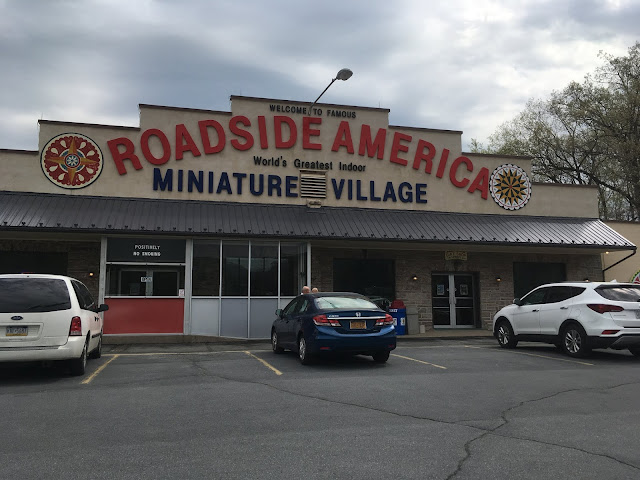 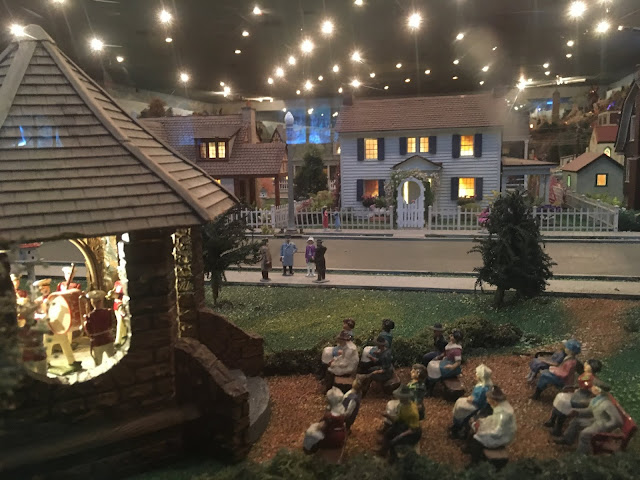 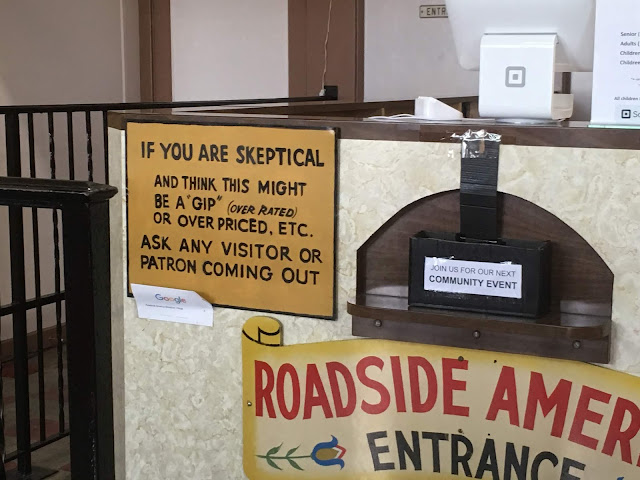 On our way into the place, we had asked a couple coming out if their visit had been worth the ticket price.

"Oh, yeah," said the man.   "And make sure you stop at the gift shop for a cheeseburger! They're outta this world!"

Well, then, indeed,  the Yard Man had to have one!   And that's how we also got served a long and entertaining history of Roadside America from the one who had cooked the burgers (and sometimes single-handedly cooked the burgers and run the whole place) ever since there was nothing vintage about it.

..............
The next morning (after our arrival in Bethlehem and our night there)  in the hotel lobby I noticed four men all dressed alike.  Insignias on their shirts were barber poles.  "Aha," I exclaimed.  "You're here for a barber's convention!"

"Not quite," one of them responded.  "But you're close!"   Dear Reader, turns out they were a barbershop quartet, in town for a competition.   I wheedled for a sample, of course.  Don't you know,  Reader Dear,  how I wheedled.   And they laughed, but then proclaimed their undying love for me in song!

"Thank you, thank you!" I said as they left.  "You're sure to win the competition!*"

*I didn't say a word about their unrequited love;
I winked at to the Yard Man.
He gave me a winning smile.

I Think I Must Have

eaten too many commas, Reader Dear, in the recent past.  There have been so many long pauses between these blog posts.  But now, here is another: 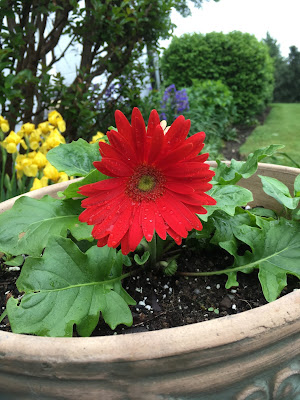 Before I finish that tale of the next-door auction,  I'm just going to show you a few cheer-producing items I've seen during the past several weeks.  The weather in my neck of the woods has been so exceedingly dreary lately that any bright spot of color makes me happy! 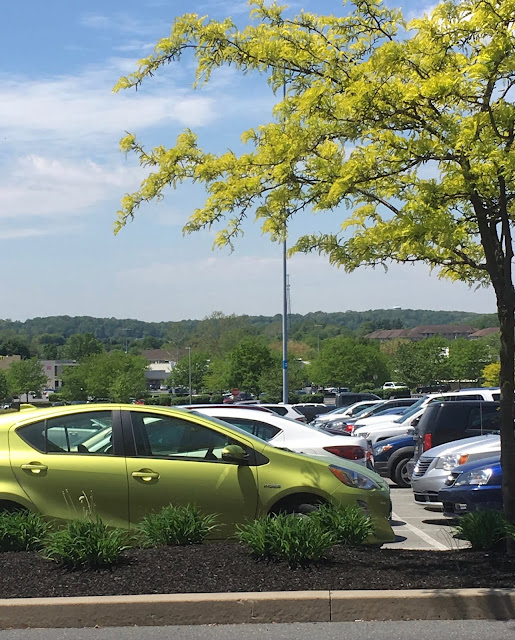 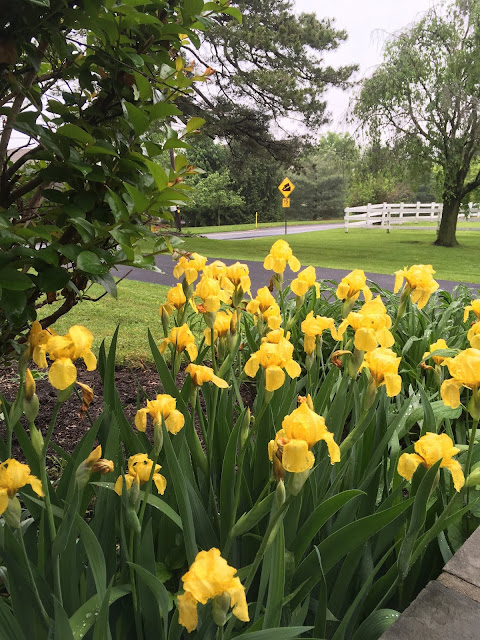 On a rare sunny day I was pleased as punch to see this random car in the mall parking lot, its color a perfect match to the spring-green leaves on the tree above it!

For this photo there is an easy explanation.  Yellow gladdens my heart like no other color! 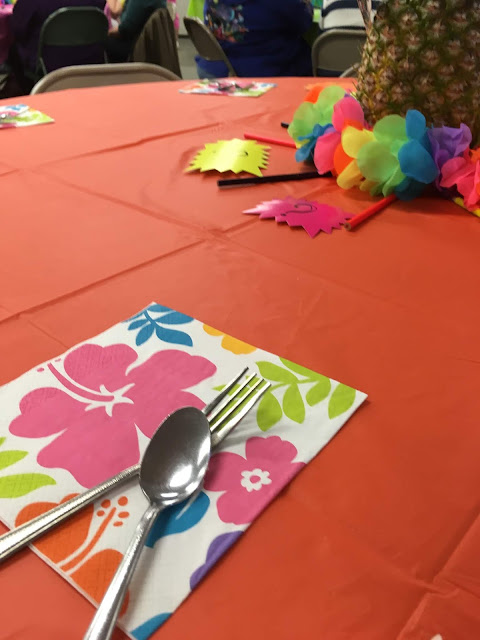 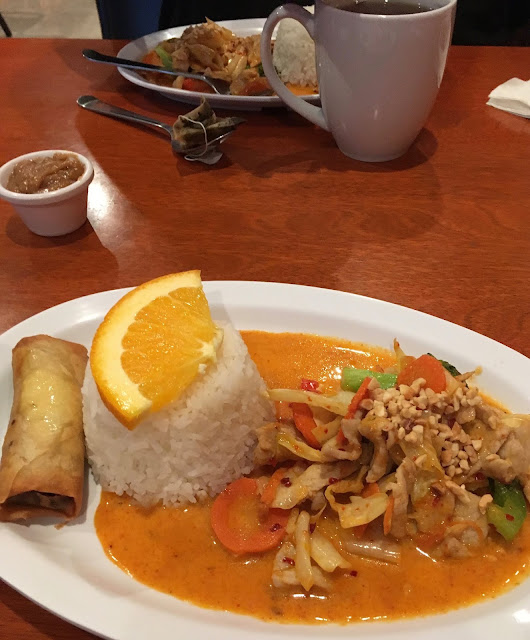 Lunch with a friend at a great little Asian place.
Colored my day bright in more ways than one!

More to follow
(trust me on this, Reader Dear). 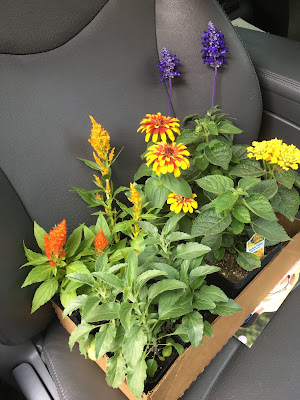 This, Reader Dear, is only one spot on the back seat of my car after I've gone to a local nursery and behaved like a kid in a candy shop.

I take such delight in this part of nature.

I've learned to appreciate the part that trots and whinnies and swishes a tail, as well.