skip to main | skip to sidebar

D. Shopping in stores; yes, I miss it!

I have no recent illustrations of store-browsing (the physical-walk in the door of a building-stroll down aisles- handle the merchandise-perhaps even undress and put store clothing on one's body (gasp!). Reader Dear, it never occurred to me that I should take photos of such things. **

**I said.  And then, I went browsing through photos and found THIS!*** 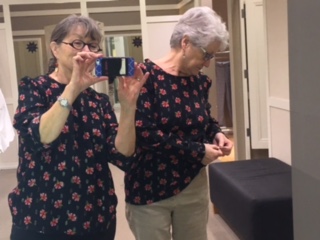 ***What are the odds?!  I'm shopping with a friend.  We find a top that is severely discounted because the store is going out of business.  Yes, they've got both of the sizes that we need!  First we both say, "Yes."
But, hmm.
Then, we both say, "No."

We leave the store, little knowing it's the beginning of the end****.

With a few exceptions, all we've got now, Reader Dear, is envelopes in the U.S. mail, or great cardboard boxes arriving on steps and porches. And, then, of course, there is this: 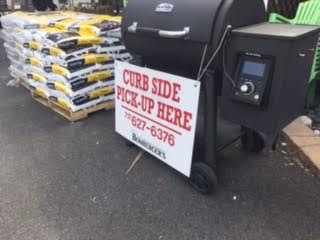 It was one hundred years ago today, Dear Reader, that the young man in this photo joined the human race.  June 11, 1920.  This man raced for eighty-six years before he trotted to the finish line in 2006.  He would have said he "bit the dust" or "went to meet his maker" or used some such colorful mode of describing his ending.

Daniel  (I did not know him yet at the time of this photo) was smart and funny and known for his hijinks and wisecracks.   When I met him, he was still in his twenties and his family was about to double.  A few minutes after I said hello (Don't make me spell it all out, Reader Dear.  I cried when we met.  Six minutes later my twin brother was born.) 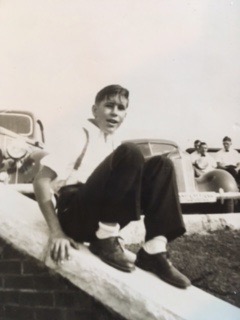 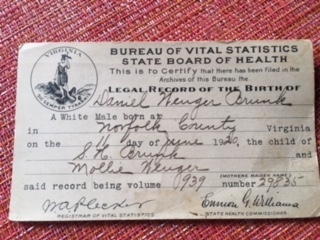 My father and mother had married in November of 1941.  As my father told it, "We got married one week, and all hell broke loose the next!"* (*American history--Pearl Harbor).   My older brother and sister, subsequently, had gotten my father an exemption from fighting  in World War II.  Now, his four children (and six years later, a fifth) got him an exemption from taking life easy. Though, truth be told, Reader Dear, if you knew this man at all, you know he possessed no inclination for sitting back and twiddling his thumbs. He loved to be busy, no matter his life situation.

And he had a lot to do!  With all his natural talents and abilities, Dear Reader, had you dropped in somewhere during his eighty-six years, you'd have likely found him:
playing pranks, plucking chickens, telling stories, delivering bottles of milk [dairy bottles made of glass], being ornery, installing a toilet, solving riddles, piloting a speedboat, starting a business, taking his family of multiple small kids on long car trips-- (think Blue Ridge Parkway), building a pier, making puzzles, working on an engine, living on a sailboat,  shucking oysters, listening to radio shows--(think DeKoven Presents), helping a friend in trouble, running multiple businesses, installing a water heater, reading his Bible, preparing barbecued chicken for a crowd, helping a stranger in distress, water-skiing, threatening to give me or my siblings "what Paddy gave the drum", building things,  telling a joke,  fixing things, building houses, making up math problems, whistling and singing, traveling near, traveling far, traveling often,  solving puzzles, reading books of all kinds, solving math problems, shelling pecans, entertaining grandchildren, caning chairs...

It would be a task far too great for me to make an exhaustive list.  Or a fair and balanced list (you know, Dear One, equal assets and flaws).  But there it is, my list.
One hundred years thence.

The Joy of Complaint


There is lovely weather today in my neck of the woods, Reader Dear (though I don't live in a woods, and I see nothing neck-like about this spot of land where my head rests itself each night).  I won't complain about odd figures of speech, however.  And I will definitely not complain about the weather.

SINCE THIS WORLD-WIDE PANDEMIC IS DRAGGING ON FOR SO LONG,  I FEEL LIKE I'VE GOT TO COMPLAIN.  For starters, I am so starved for the old way of life :

All events illustrated below, with the exception of one,  took place less than six months ago.  So, the "Old Way of Life "to which I refer  is really not all that old.  It just seems that way*
*Saving that complaint for future use.

1.  I AM YEARNING  FOR REAL OUTINGS!
A. I miss going to Performances: 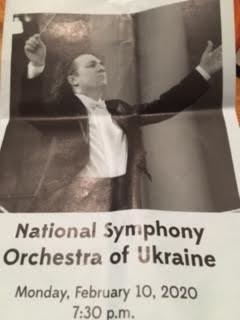 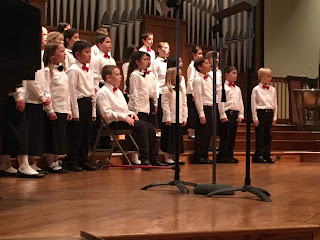 B. I miss Eating Out:

1.  I miss eating out with friends!

2. I miss eating out with  family!


3. Heck, I even miss eating out with strangers!

To be Continued....
(I mean, I hope not...[you know, not the worldwide pandemic part  (I sincerely hope THAT part is NOT to be continued... [however, you know as well as I do that we've got little input on the matter])])

It's just my complaining that is likely to go on.

(And you, Reader Dear, if you prefer not to see my complaints, you have all the power in the world to hit "shut down" [do you not?).    Or--here's a bright idea--Keep on reading these moans and grievances, but make up a few for yourself, Dear One!  You could have yourself a grand old time muttering and griping and talking about the things you don't like and the things you miss.  It's The Joy of Complaint! 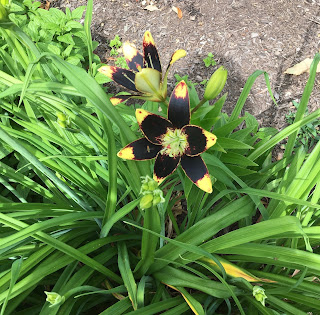 One could likely name any city around the world and discover that sleeplessness is on the rise.  In this day (or, more appropriately, night) of stress and anxiety and paranoia, there are times when I lie awake and wish to be dreaming.  So here's a quasi-hopeful remedy I've learned to employ.

I begin with the letter "A" and think up a new line for every letter of the alphabet.  Study the list, Reader Dear.  I know  you're going to  quickly spot the pattern that leads me to (semi-peaceful) slumber (I've got to admit, luck is also involved).


Alice ate avocados in Asheville.
Betty bakes bread in Buffalo.
Carol cooks chocolate chip cookies in Cooperstown  (yes, yes, Dear Reader, I'm well aware that usually the term for  cookie-making  is "baking";  I give myself a lot of leeway when making my list).
Dorothy downs doughnuts in Denver.
Edna eats elderberries in Evergreen.
Franny favors fruit in Fort Eustis.
Grace gorges on grapes in Greenville.
Heidi helps herself to hefty helpings of ham in Houston.
Ilsa ingests ice cream in Indianapolis.
And on and on...

Do you get my drift?

Keep in mind there are so many ways to vary your list, Dear One, should you choose to concoct one yourself as you strive to drift off to sleep.

Augustina acts as an activist in Athens.
Babette begins to beguile in Barcelona.
Carolina changes course in Constantinople.
Diana designs her day in Dusseldorf
Ellianna enjoys entertaining in Edinburgh.
Francesca fancies frittering away time in Florence.
And on and on...

Several notes:
*I've learned it's easier to stick with "women's" names; there's far more variety. **
**In this somewhat conservative area in which I live, roughly every fifth man is named John [strictly my own statistic, pulled directly from my head (from whence the list, not to mention this very blog post, is springing).
***Give yourself a lot of leniency if you come to that wished-for swimming-off point around U-V-W. You really don't want to get to "X" without feeling that Xavier would be fine as a gender-neutral name.

***As a precaution, it's helpful to have new categories lined up just in case you should manage to eke out a list of 26 lines and still feel wide awake.  (Countries, cities, activities, species of animal or bird, to name a few).

****Hmm,  I've never tried "life-threatening ailments" as a category, Dear One.  If you wish to do so now,  however,  think how you've got one more choice than ever before (Camilla coughed and coughed with COVID-19 ) Yikes.  I don't recommend this category if you're looking to banish paranoia!

Reader Dear.  It's not a concern that the world (in my tiny corner of it) is cloudy and gray this morning.  It doesn't really matter that things inside the house have grown slightly dirty and disheveled.  In spite of such factors,  there are still many things about which to rejoice: 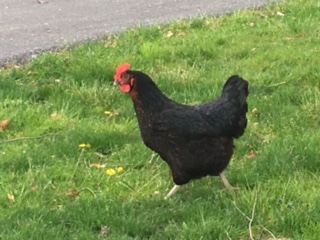 After all, look at this:   The HM and I continue to dine well! Yesterday I put on mask and gloves and set out for two different spots where food stuffs are being sold.  Now, we're reveling in FRESH FRUIT!  FRESH VEGETABLES! DAIRY ITEMS! MEAT!  CHOCOLATE!  (It goes without saying [though you'll notice I'm saying it anyway, Dear Reader] we get a constant supply of eggs from the HM's girls in the chicken coop!* 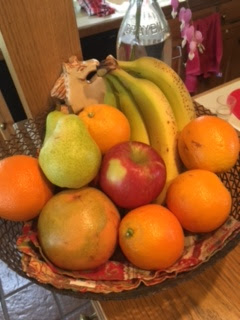 ******
When I'm tired of rejoicing,
all I have to do is dwell on the fact that the entire Planet Earth is in the grip of a pandemic.

*******
Perhaps I'll never reach out to shake the hand of a fellow human being again with such abandon.

*******
Will I ever linger in the aisles of a supermarket again, reading labels...560 mg. of sodium per serving?! Who cares--grab the can of soup and run! (another shopper is headed my way [and coughing!])? 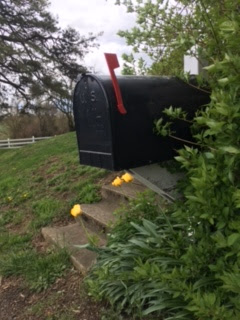 U.S. Postal mail from the black mail box with the red flag*...will I ever pull it from the black box again without pondering the (colorless) viral germs with which it's possibly infested?

*(Ms. Black, the [black] chicken  [photograph above], believes it is her private box [though she seldom sees it])

**HM carries them to the kitchen door like the precious gifts that they are.
I accept them as such.